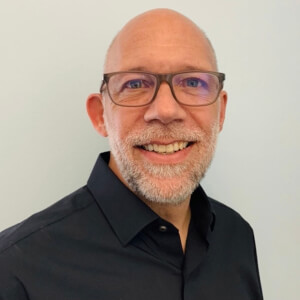 Carl Koebel joined Goodwin Recruiting in February 2019 and achieved success quickly. He became Senior Recruiter within two months and Coach shortly thereafter. Carl attributes these achievements to his ability to closely listen to others' wants and needs and his desire to help them.

Carl adds value to candidates' lives and clients' lives through an earnest and genuine approach to building long-term relationships. He has a love and drive to connect and support people to achieve their goals and dreams.

Carl is a veteran in the world of business. He has worked with large corporate brands and independently owned concepts. As a first-generation college graduate who paid his way along the journey, he knows hard work and has been in positions from hourly to owner throughout his career.

Away from the office, Carl enjoys being a father and spending time with his three children, their dog, Reese, and their two cats, Coco and Autumn. Carl loves songwriting and cooking and runs 20-30 miles a week near the beautiful Chesapeake Bay, where he resides in Annapolis, MD.

(410) 297-0739
Do not hesitate to call or email outside of these hours. If I cannot get back to you right away, I will do so during my standard business hours.